At first glance, Chromie appears to be an ordinary gnome. In truth, she is Chronormu, Bronze Dragon and a master of time. When it comes to temporal manipulation there's no problem she can't solve... with some help from her future self, of course.

Fire a long range blast that damages an enemy

Fire a series of blasts in an area

Vector Targeting
Launch 3 blasts into the air that land every 0.75 seconds towards the targeted direction, dealing 215 (+4% per level) damage each.

Place a Time Trap that arms and Stealths after 2 seconds. Chromie's Trait can be activated to detonate the trap, placing all nearby allied or enemy Heroes in Time Stop for 2 seconds. Maximum of 1 trap active at a time.

Return an enemy Hero to a previous position

Choose an enemy Hero. After 3 seconds, they are teleported back to the location where Temporal Loop was cast on them.

Gain Talents earlier than everyone else

Chromie has traveled to the future, and as such, will learn her Talents 2 levels earlier than her teammates!

Detonates active Time Traps, placing all nearby allied or enemy Heroes in Time Stop for 2 seconds.

Once Again the First Time
❗Quest: Hit 40 Heroes with Sand Blast from Chromie or her Echoes.

❗Reward: Increase the maximum number of active Echoes to 2, and increase Echo damage to 45%.

Deep Breathing
❗Quest: Every time Dragon's Breath hits a Hero increase its damage by 1%, up to 20%.

❗Reward: After hitting 20 Heroes, reduce the cooldown of Dragon's Breath by 4 seconds and its Mana cost from 65 to 40.

Gain 10% Spell Power and reduce the arming time of Time Traps by 0.75 seconds. Activate to reveal the targeted area for 4 seconds. Enemies seen are revealed for 4 seconds.

Chronic Conditions
After its Time Stop ends, enemies affected by Time Trap are Slowed by 30% for 3 seconds and allies gain 30% Movement Speed for 3 seconds.

Andorhal Anomaly
Increase the charges and maximum active Time Traps to 3, and reduce its cooldown by 8 seconds.

Bronze Talons
Hitting a Hero with Sand Blast from Chromie or her Echoes grants 50% additional Basic Attack damage for 5 seconds.

Choose an enemy Hero. After 3 seconds, they are teleported back to the location where Temporal Loop was cast on them.

Activate to teleport to an area near an Echo, swapping it with Chromie's previous location.

Activate to place Chromie in Stasis and gain Invulnerability for up to 5 seconds. Can be reactivated to end the effect early.

Fast Forward
If Chromie's primary Sand Blast travels at least 50% of its base distance and hits a Hero, its cooldown is reduced to 0.5 seconds and it refunds 10 Mana.

Activate to increase Spell Power by 30% for 8 seconds. Hitting an enemy Hero with Sand Blast reduces this cooldown by 3 seconds.

Unravelling
Every 0.25 seconds, enemy Heroes Slowed by Slowing Sands have their Spell Armor reduced by 10 up to 50. Slowing Sands persists for 5 seconds after it is cancelled.

Stuck in a Loop
Temporal Loop teleports the target a second time after the first, and Basic Abilities continue recharging for an additional 3 seconds. Increase the cooldown recharge rate from 500% to 700%.

Blessing of the Bronze

Activate to cause Chromie and all allied Heroes to gain 20% Movement Speed and their Basic Abilities recharge 35% faster for 8 seconds.

Hitting an enemy Hero with Sand Blast from Chromie or her Echoes reduces the cooldown of Blessing of the Bronze by 1 second. 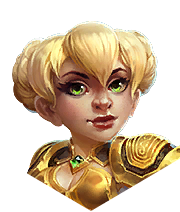