A Bruiser that deals high damage against teams with many high Health Heroes.

Madness. Betrayal. Death. These are the legacy of the Black King Leoric's reign. Driven to madness by the spirit of Diablo, Leoric brought untold suffering on his kingdom. Even after his death there was no release for the Skeleton King.

Drain Health from an enemy Hero while close to them

Leoric's ghost separates from his body to move unhindered

Leoric separates from his body, becoming Unstoppable and gaining Movement Speed accelerating up to 50% over 2.5 seconds. When Wraith Walk ends or is canceled, his body jumps to his wraith.

Wall in an area

Create an unpassable tomb for 4 seconds.

March of the Black King

Leoric haunts his enemies as a ghost while dead

Leoric becomes a ghost when he dies, and resurrects upon reaching full Health. Leoric deals no damage while dead.

Throw out a chain, attaching to the first enemy Hero hit, healing Leoric for up to 10% of his maximum Health over 4 seconds as long as the enemy remains close.

Fealty Unto Death
When a nearby friendly or enemy Minion dies, Leoric restores 1.25% of his maximum Health and 6 Mana.

Activate to heal Leoric for 30% of his maximum Health over 5 seconds. Regeneration Globes lower the cooldown of this Ability by 20 seconds.

Ghastly Reach
Increase the range of Skeletal Swing by 25%.

Paralyzing Rage
Increase the Slow of Skeletal Swing by 20%.

Hopelessness
Increase the range of Drain Hope by 25%.

Create an unpassable tomb for 4 seconds.

March of the Black King

Crushing Hope
If Drain Hope lasts its full duration, it instantly deals an additional 15% of the target's maximum Health as damage. This damage does not heal Leoric.

Buried Alive
The duration of Entomb is lowered by 1 second, but enemies trapped inside are Silenced and take 50 (+4% per level) damage every 1 second.

Death March
The final swing of March of the Black King also applies Drain Hope to nearby enemy Heroes.

Burning Despair
Deal 40 (+4% per level) damage per second to nearby enemies.

While Drain Hope is active, gain 40 Armor and the damage and area is increased by 100%.

Shroud of the Dead King

Activate to become Protected for 3 seconds, preventing all damage. 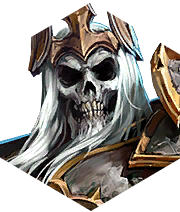